I was watching my kids play in the summer rain last week. They were both excited to get out into it. We’ve had a big heatwave in Michigan; and even though it was a humid and muggy day, the rain was welcome.

S ran out and was jumping, laughing and spinning in circles. C strolled out with an umbrella and took it all in. Watching S, looking up, sticking his hand out.

They were both enjoying, but in their own way. And it was a reminder to me of how there is more than one way to do something (or enjoy it). S wanted to get drenched and feel it up close. C wanted to feel it – but in his own, guarded way.

It’s a bit ironic because their personalities are actually the opposite – S is more guarded, whereas C just jumps right in without a care in the world.

So it was fun to watch. And oh to be a kid again!

Today, we had ice cream BEFORE dinner.

Yes, I know it probably ruined their appetite.

Yes, I know it will be harder to say “no” to a before dinner treat the next time because “we did it last time.”

But you know what? We had a GREAT day together. They got along. They left the play place when I said it was time to go. And my goodness it was NINETY degrees today!

So yeah…we had ice cream before dinner (I did too)! 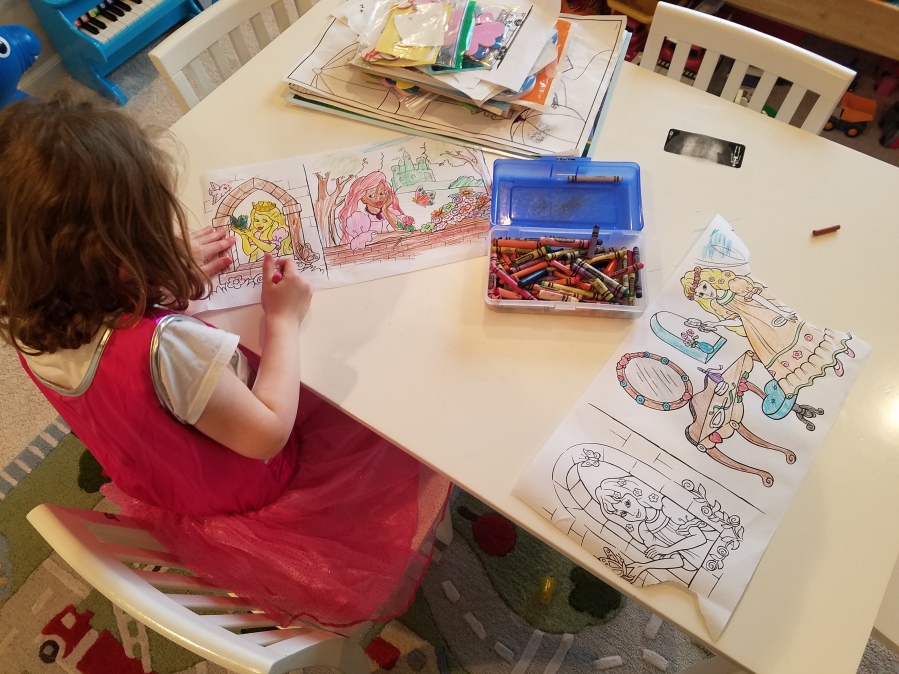 After dinner, I start cleaning up the kitchen (dishes, counters, etc.).  Hubby usually entertains S and C while I do that. They often end up going downstairs to the basement or somewhere other than the kitchen so I can work.

Then, when I’m done I either join in the play or pick up the house. (By the time the kids are in bed, we are so pooped that it’s nice to have the house tidy beforehand so we can just relax.) Hubby is usually still with the kids, sometimes outside. Then it’s usually time for C to go down – I warm up a sippy of milk for him and go fetch him to take up to his room. Hubby then usually spends some time with S (bath or play) until it’s her bedtime.

Today, S said to me “mama can you and I play until you have to put C to bed?” My first answer was “no, you should go play with daddy, mama has to clean up.” But I quickly took that back.  I said, “sure!” and she was shocked.

So we played. We did magna tiles. We played with a little horse/vet lego set she had just finished building. We colored. All the way until I had to put C to bed.

So yes, S (and C) – I vow to do that more often.  Play.  And let the dishes/kitchen/house sit and wait for me. It’s time well spent.

I’ve had so many people ask me recently…how do you do it all? Like most people, I have multiple roles in my life. Mom, wife, sister, daughter, friend, employee. But recently, with my daughter starting kindergarten, it seems a bit more concentrated on mom and work.

I’ve tried to remain active in the school…taking time off work to help out the teacher, zipping over to help for the 20 min lunch period (those lunch periods are crazy!), volunteering for the classroom holiday parties.  Then there are playdates. Then homework. Then lunches.  All the same stuff that all families go through with their kids in school.

The truth is, I have help. I have a nanny who helps out at home a TON, and let’s face it, she does more for our family than just watch my kids and get my daughter off the bus on days that I’m working outside the home (I work from home a couple of days a week). I also have a pretty involved husband. And the other secret? I feel like I’m always dropping the ball on something. Like when I’m at work, I’m not caught up at home…and when I’m at home, I feel like I missed the mark on something at work.

I guess that’s a bit of what motherhood can feel like, maybe?

Hubby and I do a pretty good job with our date nights.  We try to go every other week when possible, and it’s something we both look forward to.

This past Friday we went to Flemings, one of our favorites.  A little nicer than we sometimes do, as we were celebrating our 11 year anniversary. It was nice. And, we’ve gotten to the point that although we discussed the kids (when should we start C in preschool? Do we want S to continue learning over this summer between kindergarten and first grade?), we also discussed many other things.

We’ve gotten pretty good at making the time “us time” on date night but it wasn’t always like that. When S was little and we first had our scheduled date nights, we’d spend the evening talking about her. Then gradually as we got used to the concept of heading out without her and using it as time to actually reconnect, we made a conscious effort to use the time to really talk to each other. So much of our day to day adult interactions are coordinating parenting tactics (can you take S up for bath? C didn’t eat well at dinner, let’s see if he will finish his milk before bedtime) that this time really helps.

So this date night, we talked about work, about our parents, about the recent vacation we had just taken, what we’d want to do for our next family vacation, and a bunch of other stuff. And it was nice!

I like this daily prompt. And not just because black is my favorite color to wear; anyone that steps into my closet can quickly tell that’s the case.

It reminds me of nighttime. When all is still. When the kids are safely tucked in their beds, all cozy. When it’s time to get things done…and reflect.

I miss them when they’re sleeping. I see their little toys scattered about as I pick up the house; I see their little shoes in the mudroom where they were tossed off. But as a relax into the black of the night, I have a sense of peace.

That we’ve had another great day…that they’ve grown physically and mentally….that these little wonders are mine to shape and help grow. And I realize again in that darkness, when my thoughts are my own and uninterrupted, how very, very luck we are to have each other.